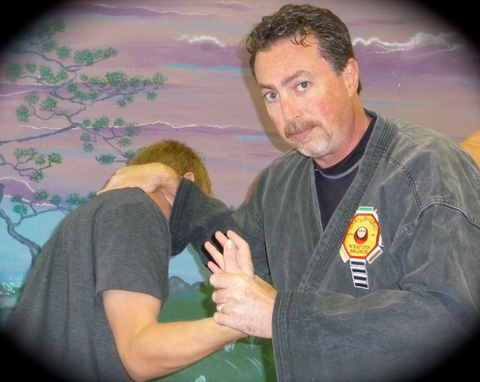 Often in martial arts we talk about maintaining proper balance, keeping a specific posture and developing a kinetic chain to deliver power. I'm going to briefly write about a slightly different angle on balance, posture and power. The subject of this blog is stealing those attributes from your opponent. The Japanese term for this is "Kazushi".

There are many ways and levels of breaking him down, and many tools to utilize. Some are as simple as a well placed combination of pushing and pulling which misaligns him and makes it impossible (for that moment) for him to preform offensively. He'll be forced (for that moment) to try to work back to alignment prior to firing a punch, kick or takedown. It's in that moment that you have the options: how much do you want to damage him. His only option at that moment is to retreat and realign.

You can utilize strikes, sweeps, reaps, and edged or impact weapons to destroy the relationship of his ankles to his knees, his knees to his hips, his hips to his shoulders, and his shoulders to his head. We can misalign these points on several different planes: forward-backward; side-to-side; and twisting.

Imagine an opponent in a fighting stance. His knees are flexed, he's on the balls of his feet, his spine is straight and his arms are chambered in front of him. He's properly aligned, and able to move in any direction, with any kind of technique. It's difficult to hit him, let alone hurt him when he's aligned and can move freely in either an offensive or defensive way.

However, if your opening offensive or defensive move begins to damage his structural integrity, you've just increased your options and limited his. As you continue to move into him, striking, bending and twisting, all the options become yours.

Obviously you have the option of carry the misalignment to the extreme and dislocate joints, break bones and destroy organs. Or not. It will be up to you and your assessment of the situation. The point is, that by destroying his structural integrity you get to make the choices, and not him.