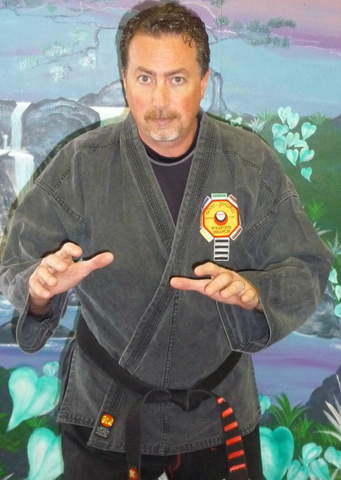 In past blogs I've touched on eliminating or reducing your opponents structural ability to move, or "Kazushi"; and how to maximize your movement by constantly changing your distance, angle and elevation. So, in essence, both sides of the coin; what to do TO his body, and what to do WITH yours. In this edition, we'll talk about how to bridge the gap between yourself and your opponent while minimizing the damage you take to enter.

Although martial artists should be very proficient in all ranges of combat, often we can do the most damage, and limit the amount of damage we receive, by maneuvering our opponent into our "Power Zone", and maneuvering your body outside his. Your Power Zone is basically illustrated by pretending to encircle your arms around a beach ball in front of your chest.

Try lifting another person: if your arms are outstretched and there's a gap between you, it will be difficult to lift someone. However if you wrap them in a bear hug it becomes much easier to lift and carry them. It's the same with striking; you can hit with much more power if your target is in range, as opposed to leaning and reaching for a target that's too far away. Any throw, lock or strike is going to be more powerful if done in this range.

That being said, it's obviously dangerous to just rush face first toward an opponent in order to bridge the gap and put him inside your power zone. Bridging or entering is a science, and I'll set out a few strategies below.

Blending. If an opponent throws a linear attack, we may choose to move our body with the energy or line of the attack, without "clashing" or interrupting the attack. This uses the opponent's movement to bridge the gap 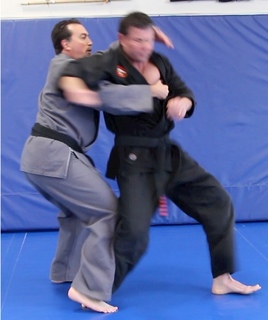 between you, and if you choose to blend to the outside, positions you behind or to the side of the opponent. If he throws a circular attack you can blend to the inside and "take over" his attack, or add your energy to his. If done correctly this will unbalance him and make his structure, and therefor his power zone, unstable. Again, blending is the concept of using his momentum to bring him to you. Your timing and movement determines that you don't clash, which would nullify your attempt to move him into your power zone without being hit. You could classify blending as defensive movement, however we should always strive to make every movement both offensive and defensive.

Entering. This is the exact opposite of blending, in that you're either initiating the attack or using a superior angle to seize the initiative. Generally you'd be attacking the centerline or changing elevation if he throws a 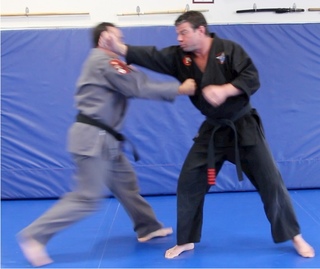 circular attack, or absorbing and enveloping a linear attack. Entering footwork angles forward, so you either bridge by meeting his forward movement, or you bridge before he begins his attack. 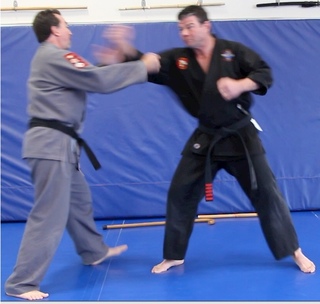 Bridge hand. Imagine your opponent throwing a tight right hook. You can't angle forward, either inside or 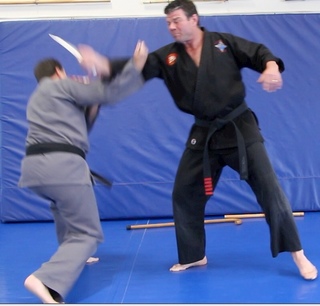 outside, because either way you'd be running into his fist. However, you can move backward, preferably 45 degrees back to your left. You hold out your right arm so his punching arm runs right into it. You've now created a bridge, but you must use it immediately or lose it. By pulling his arm to you, or driving your arm forward to his face or throat, you can bridge the gap before he fires his left. This bridge hand can also be destructive itself by targeting his bicep or brachial nerve. This is one way to bridge by avoiding.

Every concept outlined above can be used with or against edged and impact tools as well. We shouldn't have to learn entire different movement strategies depending on whether we're facing or utilizing tools or empty hands. The movements and concepts should remain the same while distancing will change.

There are times to fight, and times to avoid fighting. If it's time to fight you might as well make sure that your power zone is in play, and his is not. That's what the science of bridging the gap is all about.