I sat on a 2 day test board last weekend at Evolution Marital Arts Academy in Sparks, Nevada, and was impressed by the depth of 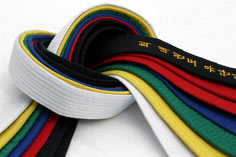 the curriculum the students had to know, and the intensity with which they performed. I did not see one hesitation or one misstep. Very impressive.

But I have certainly seen the exact opposite. Which brings up the following:

If you played a musical instrument, and you had committed to giving a recital, would you practice your butt off before walking out on the stage?

If you were invited to give a speech to a civics group, would you rehearse a lot – a hell of a lot – before stepping up to the podium?

If you were a college student and mid-terms were looming would you burn the midnight oil?

In these three cases I assume the answer would be a hardy, Hell Yes.

The same dedication to perfection should be applied by those students getting ready to test for their next rank in the martial arts. And if the student is testing for black belt the commitment to the preparation process must be at the highest possible level.

I have witnessed tests where the lack of preparation was very obvious. The level of embarrassment to the test panel and student was painful. In those not so rare occasions I put the blame on the student for not preparing and the instructor for allowing the test to go forward.